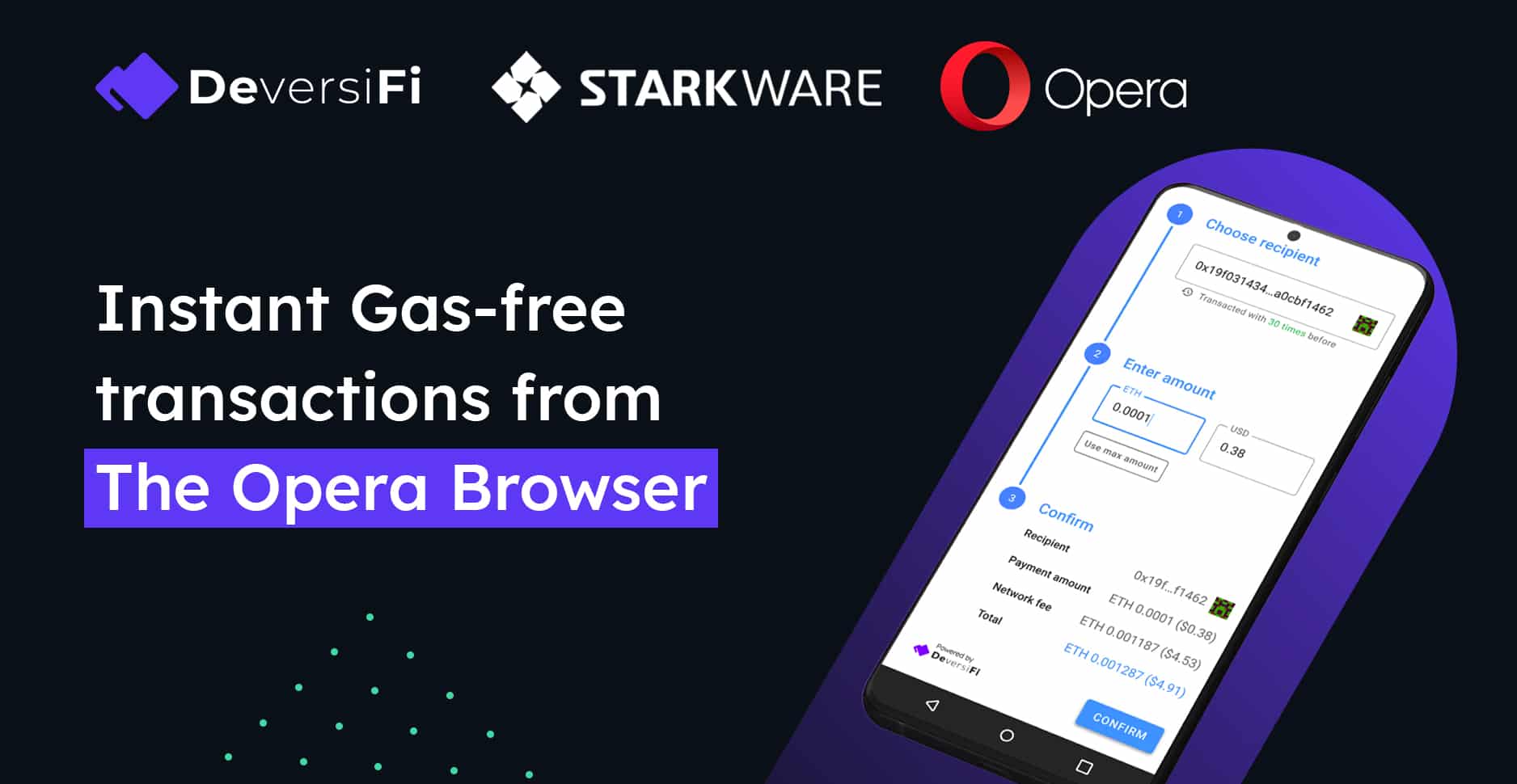 Announcing… our integration with the Opera browser 

DeversiFi has today announced a world–first integration with the Opera browser, powered by Starkware’s scaling technology.

It’s a project that will make Ethereum history and enable us to bring decentralised finance to a huge new audience.

Opera, which has more than 380 million users, became the first browser to launch a built-in crypto wallet in 2018. Now it’s about to break new ground all over again with a wallet specifically adapted for Ethereum swaps on layer 2.

With this new non-custodial wallet, millions of Opera users will be able to transact directly with layer 2. This will allow them to benefit from instant, gas-free trading and make swaps 100 times more quickly and cheaply.

How does it work?

The Opera wallet utilises the DeversiFi protocol and is connected to our markets through APIs, with underlying scalability provided by StarkEx, the layer 2 scaling solution built by StarkWare.

Users will be able to deposit fiat currency directly into their new layer 2 wallets (via Moonpay), or deposit ETH from their layer 1 wallets.

When users want to make a trade, DeversiFi will power the transaction, allowing tokens to be swapped at the best prices instantly via the protocol. Behind the scenes, StarkEx ensures that the whole process has the same security as any Ethereum transfer, at a tiny fraction of the cost.

This means a huge reduction in fees for those Opera users who want to trade crypto. Previously, they would have had to go through the layer 1 blockchain, which can suffer from slow transaction speeds and huge demand.

Because millions of people are competing to use the main Ethereum blockchain, each trade can take several minutes and users often have to pay hefty fees (the dreaded ‘gas fees’) to use a share of the computing power. In fact, it can cost hundreds of dollars to trade only a fraction of that amount.

Now, however, Opera users can stay on layer 2 and avoid the main chain entirely. Thanks to Starkware’s  technology, which can handle huge volumes of transactions, a trade that previously cost up to $50 in gas fees will now cost less than 30 cents. For smaller traders making relatively minor trades, this translates to a huge relative saving.

Building on DeversiFi’s existing DeFi infrastructure has helped Gateway.fm, who led on the wallet integration, and Opera achieve this integration in record time.

This is the first major wallet to build an alternative user interface on top of DeversiFi’s layer 2 DeFi protocol… but it won’t be the last! Up until now app.rhino.fi, which is built and maintained by DeversiFi Labs, was the primary way to interact with the protocol.

However, over time, we hope to see an ecosystem of different wallets, DeFi applications and exchanges building front-ends and completing similar integrations to help their users migrate and access the benefits of layer 2 Ethereum.

The new wallet syncs perfectly with Opera’s overall mission: to make it easier to access the web.

The browser already provides extreme data savings, privacy and ad blocking features to its users. Now it is committed to resolving the issue of gas fees and slow network speeds, one of the main barriers to widespread adoption of web3.0 – the decentralised, peer-to-peer version of the internet.

By allowing users to swap via layer 2, Opera will enable fast, cheap transactions using Ethereum. This, in turn, will pave the way for mass adoption of Ethereum and blockchain solutions more generally.

But the benefits go further. Opera’s crypto wallets are already extremely popular; at the most recent count, they had more than 170,000 active monthly users. By removing the entry costs and providing a more user-friendly experience, Opera will potentially enable millions of new users to experience the benefits of layer 2 and enjoy genuinely decentralised finance.

At DeversiFi, we’re hugely excited to be working on this project. As passionate advocates of layer 2 DeFi, we’re thrilled by the idea of so many people being on-boarded via the Opera wallet.

But, more than that, the integration signals the next phase in our evolution. We started out in 2020 as an exchange that allowed users to trade ERC20 tokens via the traditional order-book method. Now we’re a Layer 2 ecosystem where users can trade, swap, transfer and earn yield; soon they’ll be able to earn liquidity too, thanks to our forthcoming AMM pools.

From a protocol side, there are so many decentralised ways to build on our infrastructure. We’ve created a fair launch mechanism to introduce other layer 2 tokens via our DeversiFi launch market and we’ve built a rewards claiming/airdrop function, most notably used by Lido.

And we aren’t stopping here. We intend to become a catalyst for layer 2 adoption everywhere, and enable traders of all sizes to experience the true benefits of Ethereum.

How to use Opera’s new browser

To start transacting with layer 2, all users will need to do is install the beta version of Opera for Android, go to settings and open the crypto wallet feature.

The wallet is available in the beta version Opera browser for Android, and you can find it here. 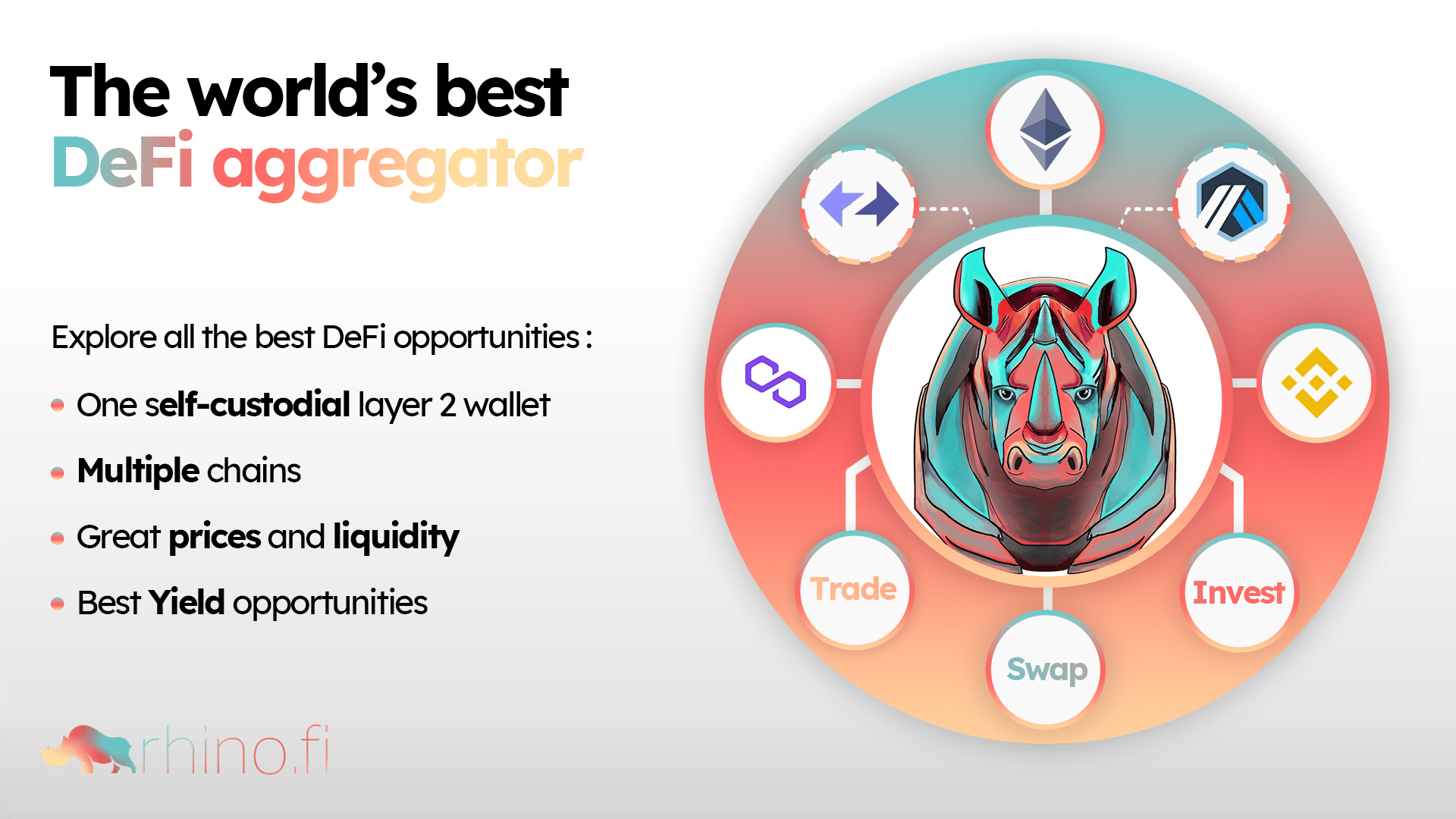